Completed in 1984 to look as though it was constructed in 1884, the Lind Building was built by local real estate developer William “Bill” Stein, a custom home developer who specialized in adding old world charm to his expensive beach front residences in Venice Beach, California. 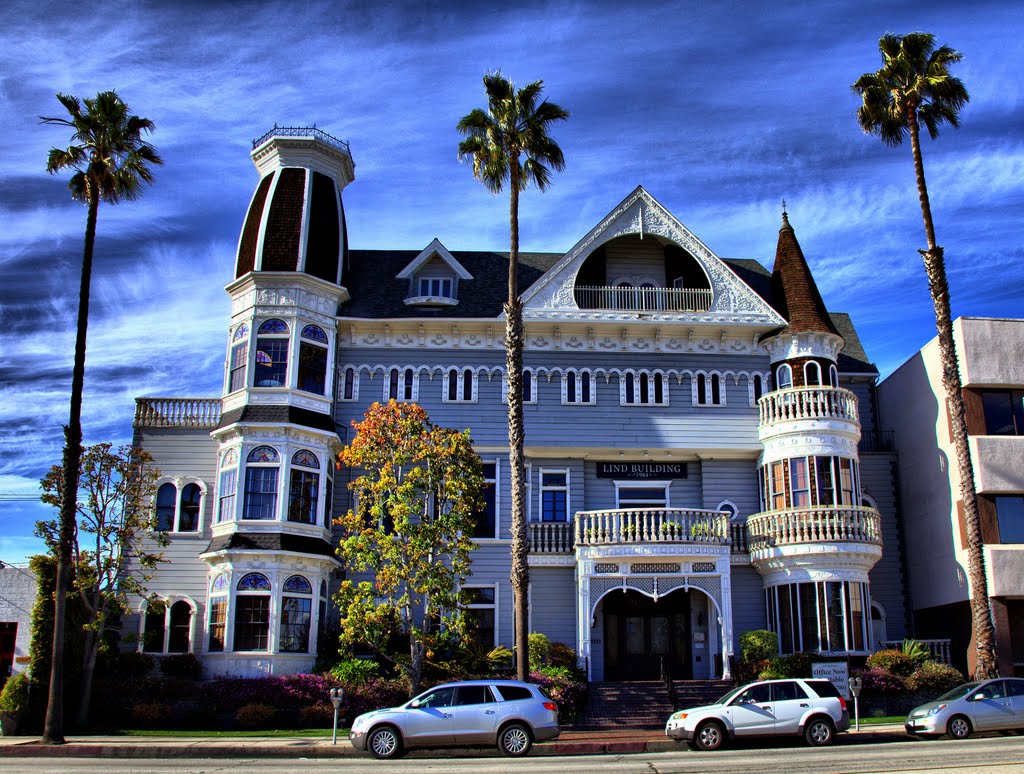 Legend has it that Mr. Stein was driving by  Corbin Avenue and Sherman Way in Canoga Park, an area located within Los Angeles, California.  He loved what he saw.  A Queen Anne-Victorian Style office building.   Anne was the Queen of England, Scotland, and Ireland in the early 1700’s.   Art flourished during her reign and one hundred and fifty years later, British architect Richard Norman Shaw and his followers used the term Queen Anne to describe their work.  The buildings from the later era did not resemble the formal architecture of the Queen Anne period, but the name came to describe their unique architectural style.    Mr. Stein inquired about the structure and  spoke with the architect, T.M.  Layman.    He asked him if he would design a building just like that one for a lot that Bill owned on Washington Blvd in  Culver City.  Mr. Layman replied “Not just like it, but I will be happy to design a Queen Anne building for your site”.

Dennis Platt was the shaping force behind the Queen Anne on Sherman Way, and was asked to assist in providing parts and advice.  Dennis had acquired the rights to the parts of a turn of the century bar in downtown Los Angeles that was about to be demolished.  He took the doors, windows, ceiling and moldings out of it and constructed a new building around those parts.

Needing more moldings and artifacts than were salvaged from the old bar, Mr. Platt made molds including the “tin ceiling” and other custom moldings found throughout the building.  From these molds, additional parts were made, mostly out of “Plaster of Paris.”   These plaster works of art were  custom painted to accurately resemble the original hand cut items made from wood circa 1880. Later many of these molds were used for designs for the Stein Building, but Mr. Stein created many of his own moldings and produced them in the shop in the garage.

Newly discovered plaster molds during the Queen Anne era also afforded the opportunity for ornate decorations at a fraction of the cost of hand carved moldings.  They are represented in the lobby and hallways above wainscoting and oak paneling.  Also characteristic of the Queen Anne era, the building is asymmetrical and displays its Palladian windows, dentil moldings, bay windows, turrets, corbel brackets supporting overhanging sections, quoins on the corners, board –on- board siding and elaborate masonry work.  A raised prominent covered entry leads up to double-beveled and stained glass doors with sidelights and transom windows.  It takes awhile to take in the marble floors, oak molding, wainscoting, high “tin” ceilings from the 1880’s bar in downtown Los Angeles, and a three tier polished brass “gasolier” light fixture when entering the lobby. 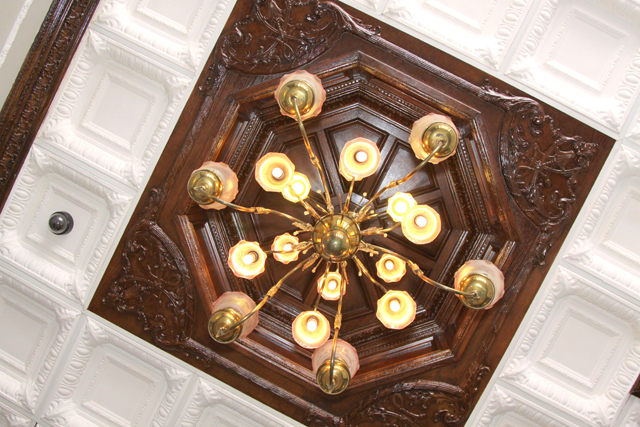 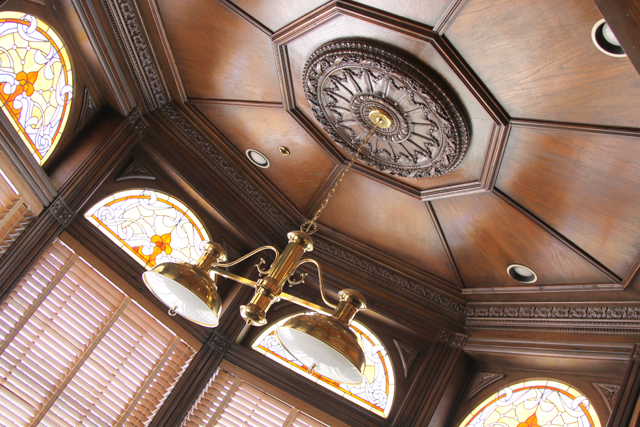 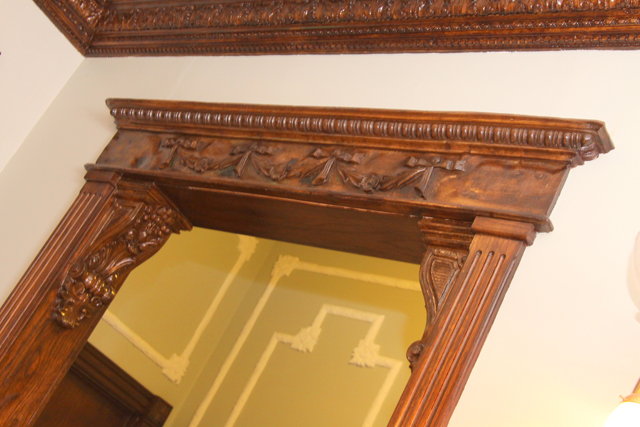 While there is no history of Queen Anne office buildings, there were of course many Queen Anne mansions.

Often people ask “did this used to be a house?”  The answer is no, it was built new as an office building and thankfully so because it has 3 levels of parking which a house would not have had.  And of course, in 1884, there were no cars to garage.

As unusual as the exterior is for a modern office building, the interior is just as unique with lots of stained and beveled glass, moldings and Victorian features such as exceptionally high ceilings and transom windows to let the hot air escape.  It also features  “cozy corners” in many of the offices.

1884 was a special year for Victorian architecture.  Gas lights which had been the main source of lighting since candle lighting were augmented with electric lights.    The combination provided soft light from the electric bulb and a warm glow from the gas lamp flame.  The light fixtures in and outside the building replicate this lighting innovation.  These lights were called gasoliers.

Interior plumbing was introduced and Thomas Crapper’s high- mounted, indoor flushable toilets  were becoming commonplace.   That is where many believe the expression, “take a crap” originates.  These “Crappers” are present in the ornate bathrooms with marble walls, mosaic tile floors and oak paneling.  Electric saws were now available so even a “commoner” could afford to have some “gingerbread” or ornate carved wood on the inside and outside of a building that only the rich could previously afford to adorn their homes.

The Queen Anne form of architecture reined from 1884 to 1905.  It utilized styles from earlier forms of Victorian design.  And it used all of them.   It was a period of excess.  It was influenced from many cultures.  The French emphasis was seen in the elaborate iron work that combined wrought iron with cast iron and large front balconies.  This style can be seen in the French quarter in New Orleans.  Italian architecture added the cupolas.  English architecture brought the turrets, wood paneling, beveled and leaded stained glass and a mansard roof with dormer windows.   The Chinese influence can be seen from the abacus design on the front and rear canopies and the octagon and shingle designs came from earlier Victorian architecture.  At that time, the English dynasty had spread to the four corners of the world.

It took over 4 years to build the complicated structure.  Many of the parts were made by hand on the site in a wood shop located in the subterranean parking structure below.  When completed, Mr. Stein parked a horse drawn buggy in front to commemorate the opening of the building. 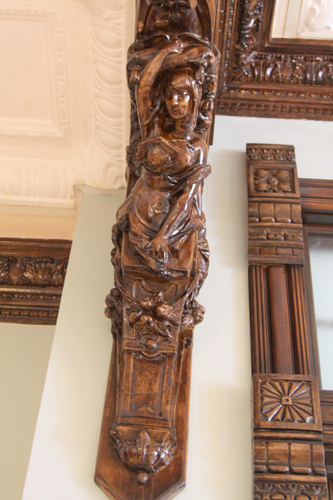 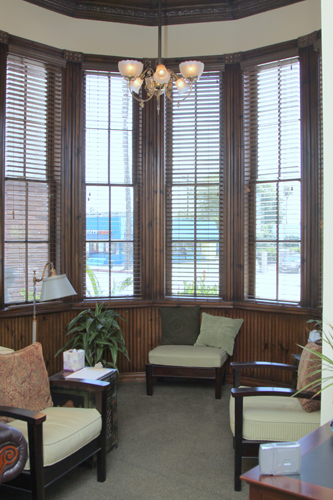 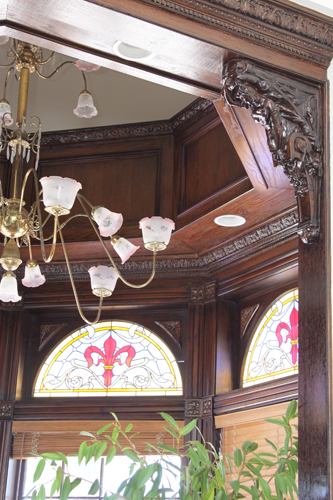